Fly Fishing For Grass Carp On Fly In South Africa

How To Catch Grass Carp On Fly? 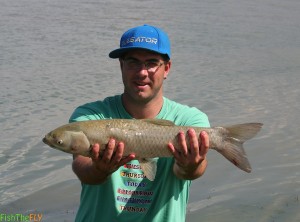 Grass Carp on fly can be a challenging freshwater fish species to target. The Grass Carp, scientifically known as Ctenopharyngodon idella, or Graskarp in Afrikaans, is a large species of Carp that is streamlined, very versatile and adaptable to South African conditions. The Grass Carp is not a native fish species, and was introduced first from Malaysia in the 1960’s, and then Germany in the 1970’s. It was believed to be introduced to control water plants, grasses, blanket weed and algae blooms in farm dams all over the Country.

The Grass Carp managed to find its way into a variety of large dams and rivers, such as the Vaal. They are now plentiful and regarded as a pest due to the fact that they have had adverse affects on our indigenous fish such as Mudfish, Moggel and Yellowfish in particular.

The Grass Carp is different to the Silver (Asian) Carp, although they both are destroyers of our vegetation and local fish populations. The Silver Carp is similarly shaped, but has a larger mouth and a more leathery skin, that lacks the scales of the Grass Carp.

More Information On The Grass Carp 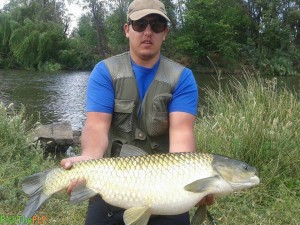 To catch Grass Carp on fly it is important to know a bit more about them. They can be found all around the Country, but are most common in Gauteng, KwaZulu Natal, Mpumalanga and the Free State. They are destructive species, as mentioned above, and disturb eggs of indigenous fish when they feed. They will either displace the eggs or suck them in and feed on them. They also can be predatory, even if they do not know it, by eating juvenile fishes in the vegetation they feed upon.

The Grass Carp can live up to 50 years or so, grow to well over a meter in length and weigh up to 50 kilograms. This large fish species is a prize on fly, even though they are destroying our general target species’ survival (Yellowfish etc.). The Grass Carp breeds in flowing waters and inlets/outlets of dams. They need a rising water level to breed and spawn, and can lay thousands of eggs. They breed quickly and grow just as quick. It is not uncommon to see a 5 kilogram Grass Carp that is only 1 or 2 years old. Depending on food availability, will depend on how fast this fish grows. The Grass Carp generally feeds on invertebrates, aquatic plants and insects.

How To Fly Fish For Grass Carp On Fly? 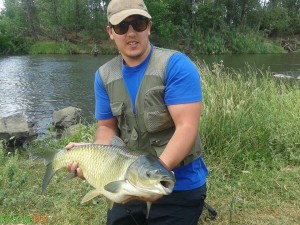 The Grass Carp is a strong fish, that almost looks like a giant size Mullet. They have hard heads and can take off with rapid speed once hooked. They will give your tackle the ultimate test. When targeting these fish you should pair yourself with at least a 7 weight fly setup, with floating line. Many Yellowfish fly anglers hook into these giants and on a 5/6 weight the fight can often result in tears. If you are specifically targeting them, you will need to use the setup mentioned above (You can go up to a 9 weight in our opinion).

We have written an article about the best Carp flies to use in South African waters, you can use these flies to target Grass Carp as well. Grass Carp are opportunistic feeders, and can be caught in slower moving pools, in dams and in the rapid sections of rivers. In dams and rivers they often come into very shallow water to feed, so before you wade in, throw a few flies close to the bank if you see any sort of movement, you will be surprised at the size of the fish that hold and feed here. Nymphing techniques are best for this species, but if you can locate them, sight fishing with a Carp Fritz, or something similar, can get you the bite.

The best flies to use for Grass Carp are: