How To Catch The Largemouth Yellowfish On Fly

Largemouth Yellowfish on fly are known as the fish of a thousand casts, and are one of the most prized targets on a fly fishing setup in South Africa. The Largemouth Yellowfish (Labeobarbus kimberleyensis) are known affectionately as Largies, and are one of the hardest and most frustrating freshwater fish species to target on a fly fishing rod and reel, or any tackle actually, which makes them such a big prize in many anglers eyes. They are distributed throughout the Vaal and Orange River systems as well as large tributaries and dams such as Vanderkloof and Sterkfontein.

This species of the Largemouth yellowfish is vulnerable, and is becoming increasingly scarce due to illegal netting, long lining, water abstraction and water pollution. These are the main threats the to the populations of the Largemouth Yellowfish.

More Information On The Largemouth Yellowfish 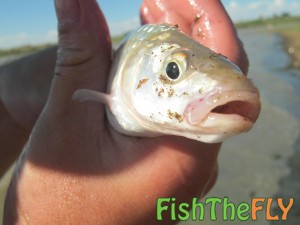 The Largemouth Yellowfish will feed on a variety of insects, insect larvae, plankton, algae and other organisms until it reaches a weigh of about 1.5 kilograms. They then become almost exclusively piscivorous, but will still take crustaceans and crabs and so forth. They are slow growing fish, which could be another reason for their scarcity. It is reported that they attain lengths of 30 centimeters or so only after 5 years. Quite scary when you think about it. The adults can be found around rocks and other forms of structure in deep water in dams, and deep slow moving pools in rivers, generally deeper than two meters. Overhanging trees and cliffs also offer something to the Largemouth Yellowfish and they can be found here as well. They are both schooling fish, where they hunt in packs, and singular fish. They breed during the peak of Summer in faster moving water, similar to the other species of Yellowfish that spawn, between November and January.

The Largemouth Yellowfish should always be released, they are slow growing and are only able to spawn and breed after 8 years of age when they are just 45 centimeters in length. They can live for longer than 12 years, especially the larger specimens of 10 kilograms and more. The angling record is close to 23 kilograms, which was caught in October 1956… I am sure we will see this record broken soon, as long as we release and conserve the Largemouth Yellowfish.

Fly Fishing For The Largemouth Yellowfish On Fly In South Africa

As a result of the Largemouth Yellowfish’s eyes being on top of it’s head, as mentioned above, fly fishing for them needs to be done in such a way where they will be able to see the fly you are using. This is why I would controversially say that you should stay away from sinking line. Many fly fishermen catch the Largemouth Yellowfish on sinking line, but I believe you have a better chance on floating or intermediate line. You have more of a chance of that fish seeing your fly this way.

Tackle wise, anything lighter than a 7 weight fly fishing setup is generally suicide. These fish are strong, ask the Smallmouth Yellowfish anglers who have hooked them on a 5/6 weight. Ideally I would target them with a 9 weight rod and reel with lots of backing. This fish will fight you to death if it could. Long leaders are needed, preferably tapered , with a 20lb tippet, yes a 20lb tippet! The leader needs to be at least 10-15 feet, as Largemouth Yellowfish are often line shy, so the heavier your tippet, the longer your leader…