The History Of Trout & Fly Fishing In South Africa

The history of trout in South Africa is a very interesting story. I cannot begin to think what would have happened if the process described below never happened. Trout are one of my favourite fish to catch on the fly, and the rich history is here for all to see.

The First Of Many, The Brown Trout

It all started off in what is the Drakensberg today, where a group of fly fishers decided that the mountain streams would be a perfect spot for the wild trout of Western Europe and Asia, namely the Brown Trout. In 1884, eggs were brought over from Loch Lagan, in Scotland, and introduced into streams or temporary hatchery type structures. It took a long time to get everything right. After many attempts, the introducer’s got the recipe right and we had wild Brown Trout in the Bushman’s and Mooi rivers, in the Drakensberg.

In 1887, the same techniques were used to stock the Eastern and Western Cape streams, only this time, they took the eggs from the Drakensberg Brown Trout and tried artificially hatching them in the Cape streams. Eventually, by 1890, there were thriving populations of Brown Trout all around South Africa, and this led to a new plan… Breeding them. The first successful Brown Trout to be spawned and bred in captivity, in South Africa, was in 1893.

The attempt to stock many river systems failed, due to the inappropriate conditions. Brown Trout occur (More favourably) in highland areas, especially mountainous regions like Cederberg, Drakensberg, Barkly, Dullstroom and so on. The Brown Trout in South Africa thrive in waters between 7 and 22 degrees, and anything over 22 degrees, they struggle to cope with, as they are not as adaptable as the Rainbow Trout.

Rainbows On The Horizon

After the success of the Brown Trout, the people involved decided it was a good idea to try the same method with the Brown’s North American cousin, the Rainbow Trout. The long term goal was to breed Rainbow Trout as well, and after their initial introduction in 1897, the Western Cape were successfully breeding them domestically in 1899. From this point of introduction and success, we have never looked back, except for recent times where there has been a question on how the Trout species have impacted areas where they were introduced. Hopefully we will be able to make them an “Honouree Indigenous Species”. The Rainbow Trout are perfectly at home in South Africa and hopefully they will be for years to come. 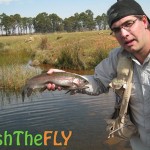 Fly Fishing has been around since the 2nd century AD, making it arguably the oldest form of artificial fishing. From when the first Trout were introduced into South African waters, there have been Fly Fishermen chasing them. Up until the mid 1900’s traditional “United Kingdom” wet flies were used to catch the Trout, and by 1960 some mainstream American flies, including nymphs and dry flies started to be used more regularly.

In 1970, South Africa had a complete make over in fly fishing, as more and more anglers started to tie and develop the Country’s “own” flies, which were more suitable for our waters. South Africa also became a lot more Americanized, and the UK methods and flies started to take a back seat, as anglers started using flies like the Muddler Minnow, Royal Coachman, Woolly Bugger and the GRHE, to name just a few. And today we have some of the best fly fishermen and fly tiers in the World. There are even some innovative techniques and some flies that are being used Worldwide.

Normally, Trout in South Africa have a life span of around 5-6 years, this is due to the conditioning of the fish and the fact they are not in their preferred exact environment. This is why they do not reach the sizes of the Trout in North America or Europe. South African trout waters are small by international standards, more streams than rivers, yet the average size of the trout caught is still fairly large. Most of the rivers produce fish of up to 3 kgs, and in the Barkly East area river fish up to 5kgs have been recorded. In the upland sections of most rivers the trout proliferate and the waters tend to become overstocked.

Good trout fishing is dependent on good rainfall and a season or two of poor rains sets the sport back. South Africa is dry, but droughts are less common in the eastern highlands than they are in the interior, and often less devastating. Just as bad as droughts, is the problem of flash flooding and siltation. Trout Farms and private dams have become very popular in South Africa and the industry is growing steadily. There are many large lakes and small weirs where Trout continue to be stocked and caught.