Fly Fishing For The Common Rock Catfish In South Africa

How To Catch The Common Rock Catfish On Fly 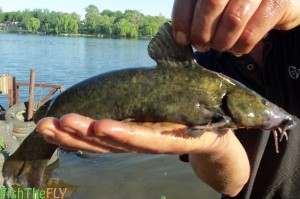 In Afrikaans this fish is known as the Klip Barber, and is common throughout the Vaal and Orange rivers, where many Yellowfish fly anglers often hook into this strange fish. It has a sucker shaped, downwards pointing mouth, that is used to feed on the surfaces of rocks, where it readily eats insects, crustaceans, and invertebrates. The larger fish will even eat smaller species, such as the Threespot Barb, when the opportunity presents itself.

The Common Rock Catfish has been introduced into a few areas, and now a healthy population can be found in the Olifants and Limpopo Rivers. they also occur in the tributaries and neighbouring rivers and streams of these rivers as well as the Vaal River and Orange River.

The Common Rock Catfish enjoys living amongst rocks in fast flowing water and rapids, where it feeds. It can occasionally be found in slightly calmer water, but prefers turbulent areas, where it’s aggressive catfish nature helps it prey on passing by food sources.

How To Fly Fish For The Common Rock Catfish?

Fly fishing for the Common Rock Catfish is generally not done intentionally… The Rock Catfish is usually a by-catch species for fly anglers who are targeting Yellowfish. But if you fish around rocks and rapids, you will have a good chance of catching these fish. You can use smaller flies and nymphing techniques, as well as small streamers and wet fly patterns.

The best flies to use to catch the Common Rock Catfish can be seen listed below, in no particular order: