Fly Fishing For Tigerfish On Fly In South Africa

How To Catch Tigerfish on Fly? 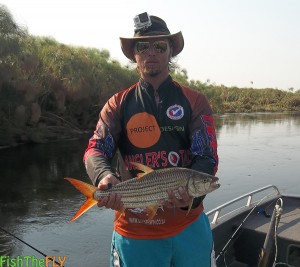 Tigerfish on fly are one of South Africa’s premier fly fishing target freshwater fish species. The Tigerfish (Hydrocynus vittatus) is like no other fish in the Country, with it’s extremely sharp teeth, streamlined appearance, bony mouth and orange fins. The Tigerfish is unmistakable, and is schooling fish – besides the really large individuals – that terrorizes the life out of all sorts of fish species from a very young age. Smaller Tigerfish under 25 centimeters feed on a variety of aquatic invertebrates and plankton. When they reach larger sizes they are piscivorous, meaning they feed exclusively on fish. Targeting the Tigerfish on fly is a tough but rewarding process, as a lot of hookups are lost, due to the bony mouths these fish have.

Tigerfish are well known for inhabiting other Southern and Central African Countries, such as Botswana, Malawi, Zimbabwe and Zambia, but South Africa have a few destinations where you can target these fish on fly. The main hotspots, if we can call them that, are Lake Jozini, the Komati River, the Crocodile River, the Sabie River and of course the Phongola (Phongolo) River. Jozini and the Komati have the highest densities of Tigerfish populations, so these are two good locations to start your quest for the Tigerfish on fly. 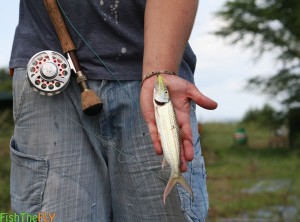 The Tigerfish prefers warmer waters, that are well oxygenated, in dams, lakes, big rivers and large bodies of water. they hang around structure, drop offs and submerged vegetation where they prey lies. They are an apex predator, that feeds mainly in the top level of the water column. They feed on species such as Barbel, Blue Kurper and Redbreast kurper, but any species of fish will be attacked and eaten. They will feed on fish well over half their size, and larger Tigerfish often turn cannibalistic, and feed on juvenile Tigerfish. They do tend to prey on species such as the Silver Robber (Dwarf Tiger) and Threespot Barb, as well as other similar species of slender shaped fish.

The larger specimens also patrol open waters and deeper waters where no structure is present. They are very active fish, and will move great distances when hunting their prey.

Tigerfish spawn and breed during Summer after heavy rains. They migrate up rivers or spawn in flooded areas of dam banks and river banks. Male Tigerfish sexually mature at about 30 centimeters and females at 40 centimeters. It is also interesting to note that female Tigerfish grow a lot larger than the males. Tigerfish in South Africa do not tend to grow to the weights they do in warmer Southern African countries, and can reach lengths of 70 centimeters and grow to weights of 7 kilograms. The Komati and Phongola rivers hold good sized fish, and some of the better average size fish can be caught in Lake Jozini.

How To Fly Fish For Tigerfish on Fly

Tigerfish are predators, and feed on fish, so a fish imitation pattern needs to be imitated. For some reason Tigerfish respond very well to red, black and pink colours in flies. To target Tigerfish you need an 8 or 9 weight setup, with floating line to fish in the shallows, intermediate line to fish drop offs, and sinking line to fish deeper waters to get the fly down to where the Tigerfish are feeding. You need at least 10 centimeters of steel wire or trace on front of your fly, because Tigerfish will easily cut you off with their sharp teeth. There are a variety of knots that can be used to tie the steel onto the fly, and you should use a tapered leader before the steel to help absorb the shock of a Tigerfish bite. They hit the fly really hard, and can often snap you off straight away when they take the fly. 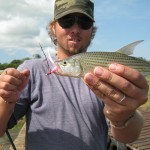 Tigerfish On A Deceiver 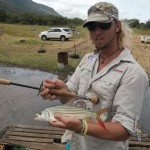 We have written an article on the 5 best Tigerfish flies that can be seen at this link, or you can see some of the best flies to use when fly fishing for Tigerfish on fly.