& Fly Fishing For Them…

Trout are one of the most well known and recognised fish species in South Africa, and the World. Trout have a rich history in South Africa and are one of Fish The Fly‘s favourite freshwater species to target. These fish are so special, and although they do not naturally occur in South Africa, have an important role to play in the angling industry. Below you will find information on all the species that occur/have been introduced, in South Africa, with a brief overview and some photo’s. Trout are closely related to Salmon, the only difference being, the species we have in South Africa do not venture into coastal or saline waters during their respective life cycles. Click the link of the species name to learn more about the fish in question. Don’t forget to have a look at the top 10 trout flies for South African fly fishing.

The Brook Trout (Salvelinus fontinalis), also known as the Brook Charr was introduced into South Africa in the early 1900’s and not a lot is known about the distribution or dynamics of species in our Country. There is a huge question mark regarding if they do still occur in the region at all. All we know at Fish The Fly, is there are records from the early to mid 1900’s of Brook Charr being stocked in our waters, and that is about it unfortunately.

The Brown (Salmo trutta) was the first of the Trout species to be introduced into South Africa and thrives quite well, especially in the Dullstroom, Lydenburg, Drakensberg and Western Cape waters, where the water and air temperature is slightly cooler than the rest of the Country. The Brown Trout is a beautiful fish and comes in a wide range of different colours and markings. The “wild” fish are beautiful and often are accompanies with small red spots close to the tail section. Brown Trout can grow very large under the right conditions and are a strong fighting fish.

The Golden Trout, as we know it in South Africa, is not actually a separate species (As many may think). The Golden Trout is actually a sub-species of Rainbow Trout native to California in the United States Of America. The fish we see in South African waters was originally spawned from a Rainbow hatchery in the 50’s and then later the eggs from this hen, and the hen itself, were used to breed with normal Rainbows to create this species. They are a beautiful fish to catch and to look at, but are more of an anomaly than a hybrid or sub-species.

The beautiful Rainbow (Oncorhynchus mykiss) is what many people picture when someone says “Fish” or “Trout”. This species now occurs all over the World and has adapted very well to life in South African waters. There are many wild and semi wild Rainbow Trout in the Western Cape, Eastern Cape, Free State, Mpumalanga and KwaZulu Natal. The Rainbow Trout can grow in excess of 20 kilograms, however in South Africa fish up to 8 kilograms have been recorded in stocked venues and fish tipping the scales close to 6 kilograms have been taken from the Eastern Cape rivers and streams. 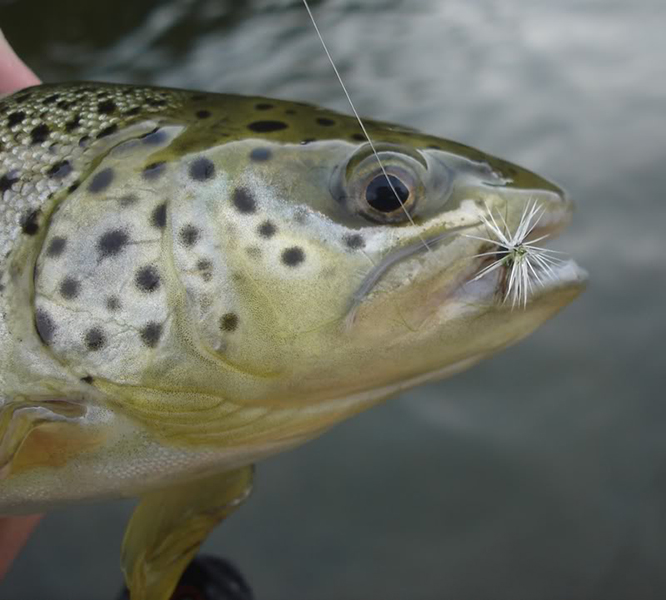 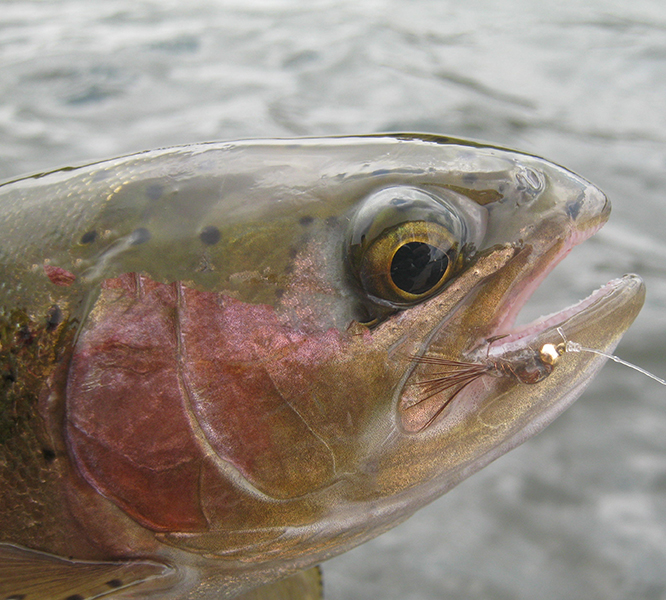 Fly fishing for these fish is the most popular way to catch them in South Africa and there are so many locations in our Country where one could cast a fly at these fish. Depending on where you are fishing, will depend on what tackle you use.

Generally when fishing small streams and rivers you are targeting smaller fish, and fish that are more skittish because they are wildly spawned, or semi wild because they have been stocked. You normally would fish floating line and a 0-4 weight fly rod, with optimum weight rod being a 3. The rod should not exceed 8 foot, due to the shadow it casts on the water, and because you normally have obstacles like trees and bushes to contend with. Your tippet should be as light as possible, between 6 and 9x (Read more about Tippets and Leaders), and your flies, whether they are dries, nymphs or streamers should be small and natural coloured, and should also imitate the food in the immediate section of the river or stream.

Stillwaters are fished a lot more than the wild streams in South Africa, and there are a huge variety of techniques that you can use in stillwater systems. Stillwaters basically refer to any large body of water that is does not have a flow or a large body of calm water that is not a river. The normal tackle that should be used for stillwater Trout is floating, intermediate or sinking line, a 4-6 weight fly rod and 3x to 8x tippet. There are a lot of stillwater flies, so have a look at the link for the best options.