Fly Fishing For The Canary Kurper In South Africa

How To Catch The Canary Kurper On Fly 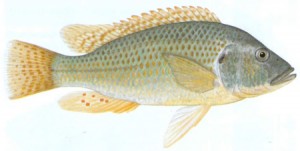 The Canary Kurper (Chetia flaviventris) is a species of Tilapia that is closely related to the Largemouth Breams, due to the size of their mouths. They are also known as the Kerriebek, and are well known to many fly anglers in the Gauteng and North West province. The Canary Kurper occurs originally in the Limpopo River system, and all it’s tributaries, which has lead them to populate many destinations and stillwaters. They have also been introduced to Rust De Winter Dam, and they have become extremely abundant here.

This freshwater fish species is regarded as a nuisance by many anglers, but it can be a real fun target species on a fly rod and reel. They take over wherever they are introduced and now occur in far more areas than their original range of the Limpopo River. The Canary Kurper is often caught by Fly Anglers going for small species or Blue Kurper and Largemouth Bass.

More Information On The Canary Kurper 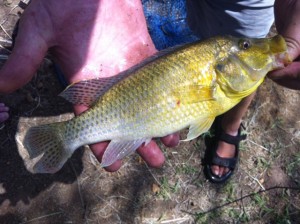 The Canary Kurper reaches a length of around 30 centimeters and 1 kilogram in weight. They like standing waters, such as dams, as well as rivers and faster moving waters. They are very adaptable and will take a liking to any body of water. They breed in Summer and the female keeps the eggs and fry in her mouth. They are mouthbrooders like many other Tilapia species in South Africa. The Canary Kurper, occasionally called the Canary Tilapia, is a shoaling species and you can often locate them in shallow waters of calmer areas of a river and in dams, as they break the surface or cause wakes while they feed. They are opportunistic and have quite large mouths for their size. Canary Kurper will feed on anything from plant matter, to insects, to larvae to small fish. Canary Kurper have even been known to prey on Bass fry and Bass eggs, where they use a clever tactic to lure the Bass away from their nests while the other half of the shoal gets to feed.

Good areas to look for Canary Kurper are around structure. They love boat slipways, rocky areas and areas with aquatic vegetation. The bigger dams they are found in include Roodekoppies, Vaalkop, Rist De Winter, Rietvlei, Renosterkop, Bronkhorstspruit, Hartbeespoort and Roodeplaat. They can also be found in the Letaba River.

How To Fly Fish For Canary Kurper?

These are a fun target species, and you can catch them quite easily. The best way to target Canary Kurper would be on light tackle. A 0 – 3 weight setup is ideal, with light tippet of about 4lbs. Catching these fish can be great for young or new fly fishermen and women. They attack a variety of flies quite aggressively, and will even occasionally take a dry fly. Floating line is ideal, although you can use intermediate and sinking line. The key is the retrieve; short, fast and jerky strips will entice these fish. Sometimes they can be a bit shy, when they are try a slow and constant retrieve.

If the Canaries are on the bite, they will take almost any fly. The best flies in general to target Canary Kurper are: