How To Catch Cape Kurper On Fly?

Cape Kurper (Sandelia capensis) are a fairly rare fish in South Africa, but they are a beautiful fish to look at and catch on fly. It is endemic to South Africa and has the special ability to breathe air, similar to the Climbing Perch, of which it is closely related to. The Cape Kurper occurs in the Eastern and Western Cape, and it is a tough fish, that adapts well to a variety of conditions. The main threats to the Cape Kurper are those of the Largemouth Bass, Smallmouth Bass and Spotted Bass, which were introduced into many of the waters where these fish occur.

More Information On The Cape Kurper 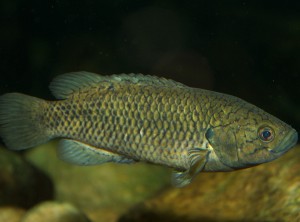 The Cape Kurper can attain lengths of about 25 centimeters, and are often used as an aquarium freshwater fish species. They are quite aggressive fish, so they are not suited for aquariums with smaller fish species in them. They are also highly adaptable and can survive in a variety of habitats. Preferably, this fish likes slow flowing water in the shallow parts of the rivers in which it occurs. They require rocks, roots of plants, aquatic plants or similar forms of structure to shelter. The Cape Kurper breeds in Summer, and are very aggressive, attacking other fish and organisms that get too close. The male guards the nest of eggs, which stick to the bottom of the river bed.

How To Fly Fish For The Cape Kurper?

The Cape Kurper is generally a by catch while fly anglers are targeting Trout, Bass and Yellowfish amongst other fish species. They can be aggressive and will readily take a fly. Nymphing methods seem to produce good results, and small streamers and wet fly patterns also work quite well. The Cape Kurper is not afraid of taking a dry fly either, so a lot of fun can be had with this fish. Small flies are essential in targeting this species. If you are targeting this species or you are fishing smaller flies for other species in the area a 0 – 2 weight fly setup with floating line is the best way to go. Use as light tippet as possible, and fish around rocks and vegetation in shallow water.

The best flies to use for the Cape Kurper can be seen listed below: