How To Catch The Blunttooth Catfish On Fly

Blunttooth Catfish (Note the fin between the dorsal and the tail)

More Information On The Blunttooth Catfish 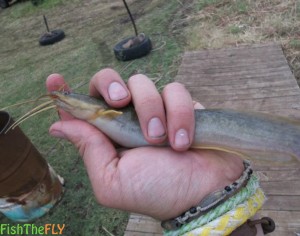 The Blunt Tooth Barbel is more well known as a fish species that joins the Sharptooth Barbel in the annual Catfish run in the Okavango Delta, and during this time it becomes very aggressive, and also forms a large part of the Tigerfish diet. It can grow up to 6 kilograms or so and is quite an aggressive species, and a predator fish. It feeds on crabs, freshwater shrimp and mussels, insects, molluscs and of course, fish.

The Blunttooth Catfish has a limited range in South Africa, one that includes some rivers that flow into the Kruger National Park, Limpopo River, the Pongola River (Phongolo) and Lake Jozini. They don’t grow as big as their cousin relatives the Barbel, but they often hunt in shoals, and can grow upwards in length of 1 meter. They can be a challenging, but rewarding species on fly.

They prefer well vegetated areas in flood plains, marshlands and shallower waters of dams that are densely populated with structure. They are also at home in rivers, and often hunt as an ambush predator.

How To Fly Fish For Blunttooth Catfish On Fly?

You can use a calling method (Where you splash the fly a few times in the water to “call” the fish), or you can sight fish – where you look for them in the shallows (They often tail or sip on the surface) – for them.

Have a look at our article on the best Barbel flies, this can help when targeting the Blunttooth Catfish.

The best flies to use for the Blunttooth Catfish are: